And How to Develop Leaders So They Can Transform Your Business

Caution: The way your organization is developing its leaders may be setting them and your company up to fail. That’s because leaders aren’t fish, yet many organizations treat them as such. The result is jaw dropping: Annually, in the U.S. alone, over $10 billion is wasted on leadership development. And that number is grossly understated. It doesn’t include these silent company killers:

How do you develop your leaders? And is it working? For certain, while leaders aren’t fish, if they are treated like one the entire organization will begin to smell. Here’s what we mean.

Imagine you’re sitting by a large fish tank. The water is yellow, cloudy and scum-filled. As your eyes water from the smell, you observe two people enter the room. They have patches on their overalls which read Fish Tank Cleaners. In a business-as-usual

style, they pull a small net from their bag and scoop out a fish. They drop the fish into a small glass bowl. With care, they apply tiny brushes and scrub the fish. Then, seemingly proud of their work, they drop the fish back into the dirty tank.

After watching them repeat this exercise with several fish, you can no longer contain your curiosity. “For heaven’s sake,” you ask. “What are you trying to accomplish?”

The workers look at you as if you’re crazy. Shaking their heads, they exclaim, “Haven’t you ever seen a fish tank cleaned before!” 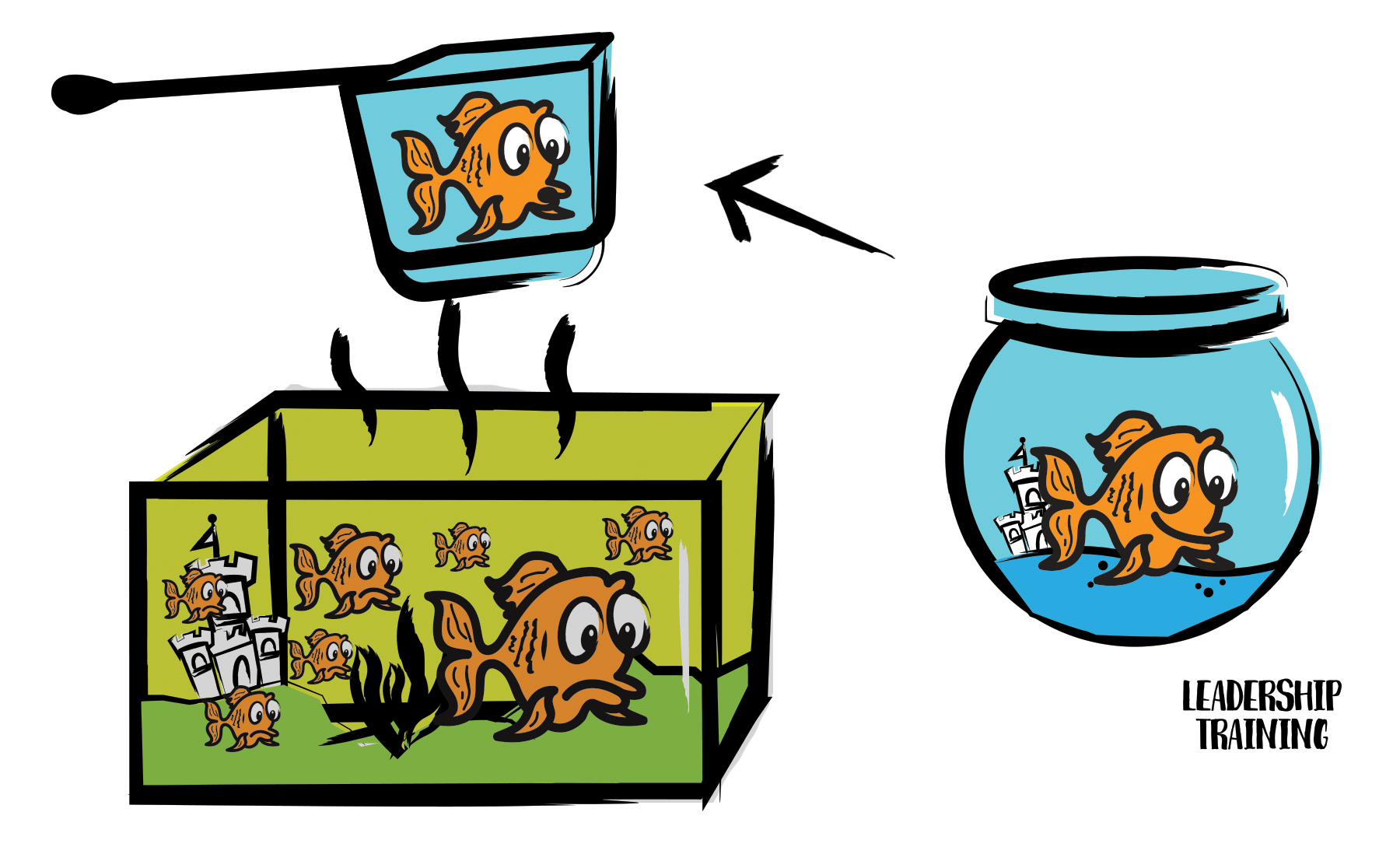 Developing Leaders Only To “Un-develop” Them When They Return

There’s no such word as “un-develop.” We use it here, however, to highlight a similar error and misbelief with which too many companies operate. The standard method for developing leaders today remains the Dirty Fish Tank Training Model: taking individuals from their environment, “cleaning them,” then re-submerging them back into the ecosystem of unchanged processes, structures and norms (the system). Whenever an organization attempts to develop the talent of a leader in a manner that is not congruent, or in harmony with, the system around that employee, they’re using the Dirty Fish Tank Training Model.

Despite overwhelming evidence that the model is ineffective, many organizations still bring out their fish scoops and hope somehow isolating leaders will change the environment. There’s little mystery why little or no change occurs—and why companies, with the very best and strategic intentions, continue to suffer from inadequate talent development: As in any functioning, integrated system, to truly create sustainable changes in the thinking and actions of a person, the system around that person must be addressed and elevated as well.

In their October 2016, Harvard Business Review article, “Why Leadership Training Fails—and What to Do About It,” authors Beer, Finnström, and Schrader reinforce this truth with data. They announce that “corporations are victims of the great training robbery.” Specifically, they found through numerous studies that “…even well-trained and motivated employees could not apply their new knowledge and skills when they returned to their units, which were entrenched in established ways of doing things. In short, the individuals had less power to change the system surrounding them than that system had to shape them.”

There is no doubt that the skill of the leader affects the performance of the team. We’re not suggesting that teams don’t gain some benefit from leaders being sent away for development. We’re saying that teams and the organization don’t benefit enough. It’s not even close.

The System of Excellence: How to Develop Leaders That Can Transform Your Business

When we made the discovery we immediately wondered why we hadn’t seen it sooner. While supporting a multi-national client (we’ll call Company S), we used a common approach to categorize their efforts in learning and development by sorting their investments into three areas: leadership, culture, and talent. While Company S had invested hundreds of thousands of dollars in these three areas, they weren’t seeing an improvement. In fact, the data, including dismal business results, indicated they were losing ground.

That’s when we saw it: Two gaps existed in their employee development.

What we discovered that day: An organization’s success in effectively developing its leaders is correlated to the ability to effectively align and integrate four human components: Heart-inspired leadership, activated talent, one-team culture, and the whole person. We call this the System of Excellence. 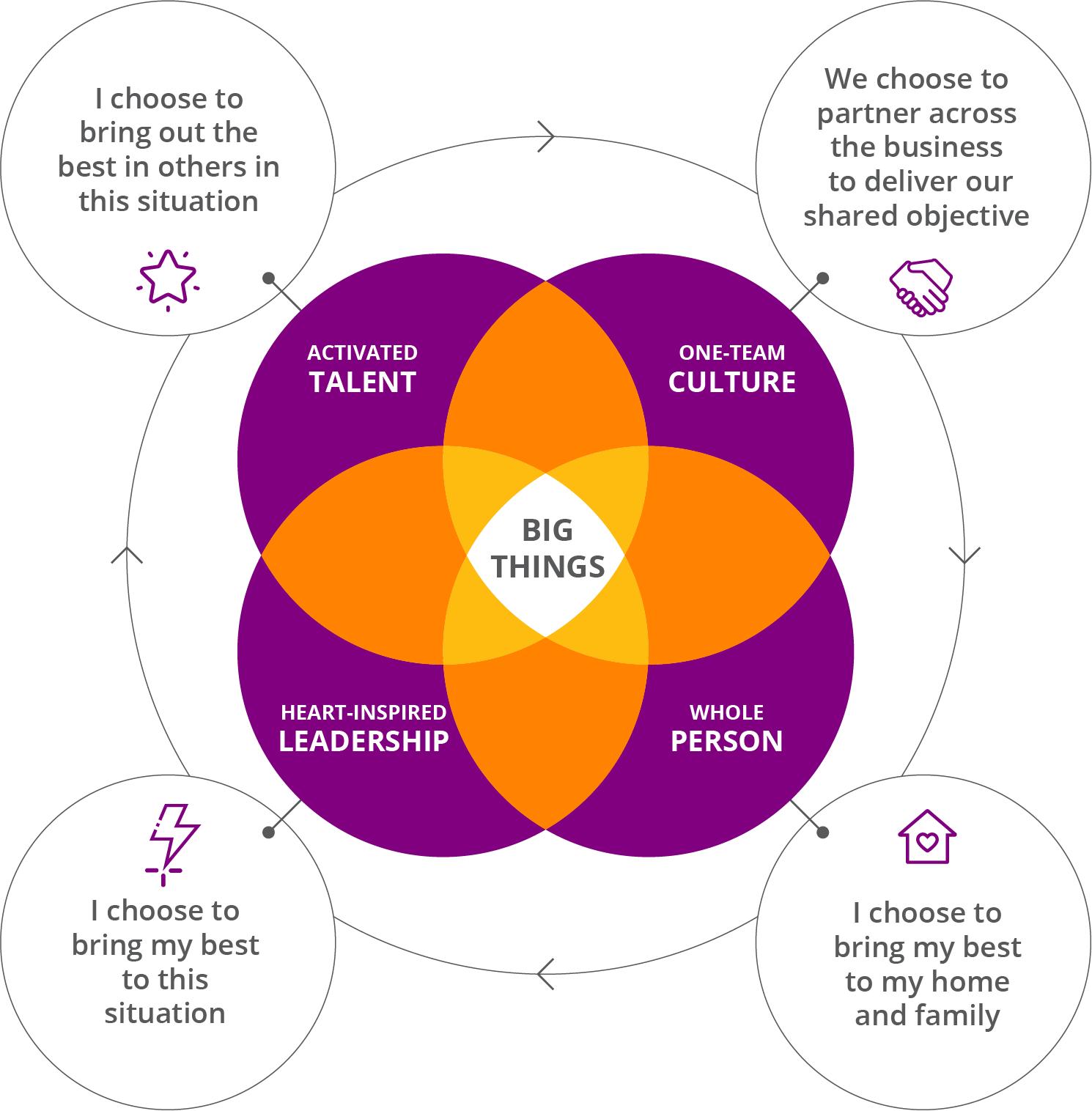 When these four elements are in concert with one another, we see ample evidence that the individual and the system evolve and co-exist together. Our experience shows that every element of the System of Excellence is vital in the design, delivery and sustainability efforts of any training. When this is the case, employees feel connected and inspired, their potential is activated, the teams within the culture function as one, and the employee’s whole life is elevated.

Developing Leaders in the Context of Teams

Our breakthrough in the value we bring to our clients occurred when we broke from the age-old trend of removing leaders from their teams and insisted they learn with those whom they work with the most. We call this approach “Developing Leaders in the Context of Teams” (DLCT). It’s a practical approach that requires bringing the leader(s) together with those whom they must partner with to get a job done. Intact functional teams are common; however, we’ve replicated the DLCT success within cross-functional and project teams, as well as those teams newly formed through mergers and reorganizations.

The DLCT approach merges the four components of the System of Excellence and delivers rapid benefits not realized or achieved with the Dirty Fish Tank Training Model. These outcomes include:

Due to the success of the DLCT approach, we also now work with teams of leaders from the same organization. In these cases, these leaders are seen as early adopters and change agents brought together as one larger team to activate the potential of the entire organization. What’s required: empowering the leaders to create a multiplier effect as they return to their teams and, by teaching what they have learned to others, leaders are able to activate expanded potential across the system. It becomes an efficient and cost-effective method for developing and engaging talent.

There’s no doubt that enabling our clients to increase performance levels and deliver improved business results is gratifying. Perhaps, though, what’s been most exciting for us as we’ve supported our clients in using the System of Excellence approach as they develop their leaders, is this: There’s nothing like seeing employees become the heroes they can be.

The System of Excellence isn’t about changing the inspired and effective leadership content or programs you already have; it’s about making sure what you are implementing has a chance to work within the system your leaders operate. Then, as your leadership programs deliver on their potential, the employees, especially those once thought incapable of changing their behaviors, transform and flourish. They get to show who they really are and what they are capable of doing. And, your business benefits.

For more on this topic, check out these resources: 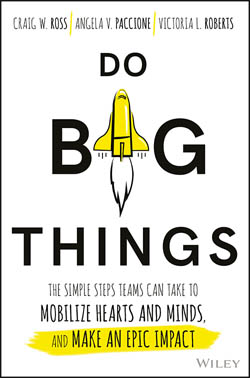 Transform Your Team: Change The Way Your Leaders Are Developed